Advisory meeting of WHO Experts 26-29 November, 2019 in Jamnagar, India International Benchmarks for Practice Documents in Ayurveda, Unani and Panchakarma

A member of the international Maharishi AyurVeda Community, Franz Rutz from Switzerland was appointed to the prestigious Advisory Meeting of World Health Organisation (WHO) Experts on the International Benchmarks for Practice Documents in Ayurveda, Unani and Panchakarma this past November in Jamnagar, India.

Around forty Ayurveda experts from 20 countries were invited and hosted by the Indian government to revise and expand the document on the benchmarks in Ayurveda training that has been in existence since 2010.

Franz Rutz has been a member of the board of the Swiss Regulatory Body for Alternative Medicine for ten years. He has played a key role in establishing Switzerland as the only country to have formally regulated and established Ayurveda training, with degrees awarded with nationally approved diplomas.

Franz Rutz’s international activities as a strong advocate for Ayurveda came to the attention of both the Indian embassy in Berne and the World Health Organization in Geneva. At the Advisory Meeting, Mr Rutz helped revise three planned documents over four intensive working days at the institute of the Gujarat Ayurveda University in Jamnagar. Approximately 300 pages of text were reviewed sentence by sentence in three working groups.

“The hospitality of the Indian hosts and representatives of the WHO was exceptionally warm” reported Mr Rutz. “Right from the start, a feeling of family connection was clearly noticeable among everyone.”

Work continues on polishing and finalizing these core WHO benchmarks. “In a few more months the final official WHO documents will be published as recommendations for practice in Ayurveda, Unani and Panchakarma” explained Mr Rutz.

“This will mark a major milestone in the recognition of Ayurveda and the establishment of international standards. We are pleased that Maharishi AyurVeda has been able to contribute to this important step of progress.” 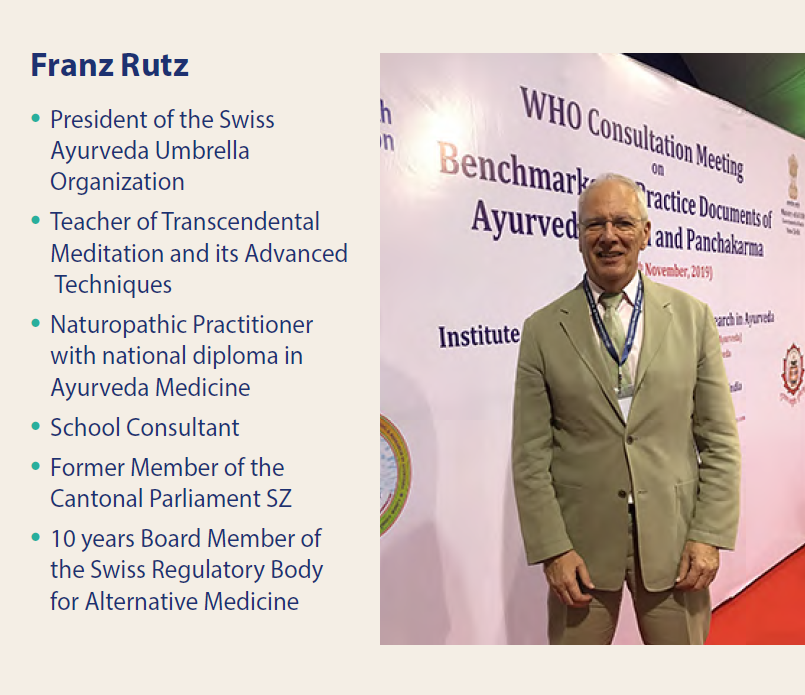