Ayurveda experts and exponents from many European and India met last Tuesday, 26 January, in the European Parliament for the 2nd Ayurveda Day. 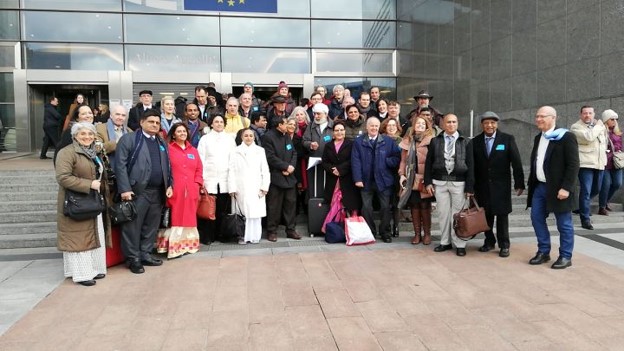 Amarjeet S Bhamra proposed the creation of Ayurveda Centre of Excellence for Research, Education and Practical Application in continental Europe.

Together with Prof Madan Thangavelu, he handed a statement of intent between the EU and India to all chief guests.

Amarjeet S Bhamra also took the privilege to thank India´s Ambassador to Belgium, Luxembourg and the European Union and all her staff for their support and providing vegan buffet and fruit juices to all the delegates.

Ambassador Ms Gaitri Issar emphasized „Ayurveda since ancient times belongs to India. It is the most ancient surviving system of medicine in the world.“

Maharishi Mahesh Yogi has brought Ayurveda from India to the whole world since the 1980s with the help of India´s greatest Ayurveda leaders.

Prof. Tony Nader, MD Phd MARR, Maharishi´s successor as leader of his worldwide movement, addressed the Ayurveda Day via video conferencing. „Health budgets are soaring and drive every nation into great concerns about how to ensure prevention, how to ensure health and how to protect the people from falling sick. In Ayurveda we have the perfect knowledge, the most ideal approach to prevention and cure. … For cure we have different procedures that include consciousness mind, body and behavioural value as well as the use of plants, herbs and minerals. Around 20.000 research papers on Ayurveda show the importance and benefits of these medicines on different parts of the physiology and curing diseases as well as preventing diseases before they arise. It is my joy to send my gratitude to the organizers, to the European Union and leaders who are welcoming the knowledge of Ayurveda for the creation of healthy individual and health society through this holistic approach to health. With techniques, like Transcendental Meditation and its advanced techniques, it has been proven that when a small number of people in a society practises these techniques an inner peace is being created and also a collective awareness change that reduces criminality and problems, increases productivity and leads to life in healthy society.“

Dr Partap Chauhan, Ayurveda expert from India that has visited over 40 countries spreading Ayurveda, TV personality, pioneer of Ayurvedic telemedicine, with a network of 80 Ayurvedic clinics all over India and only Ayurvedic doctor that won UN´s prestigious „World Summit“ Award, also addressed the meeting. “The attitude towards Ayurveda in Europe is undergoing a sea-change. The earlier scepticism has given way to curiosity and would soon lead to acceptance. There are many areas like mental health and chronic diseases for which modern medicine is found wanting but Ayurveda has an effective solution.”

Another highlight was Gita Desai´s presence. She showed the trailer to her film „Ayurveda Unveiled“, that is being shown in movie theaters in the US and many countries.

The Indian Embassy in Brussels had also contributed a nice buffet for the participants.